Wall is (never) over

Last November 17, on the 25th anniversary of the Velvet Revolution, a group of students whitened the famous John Lennon Wall of Prague, thus giving back the legacy of a provocative role to the bricks 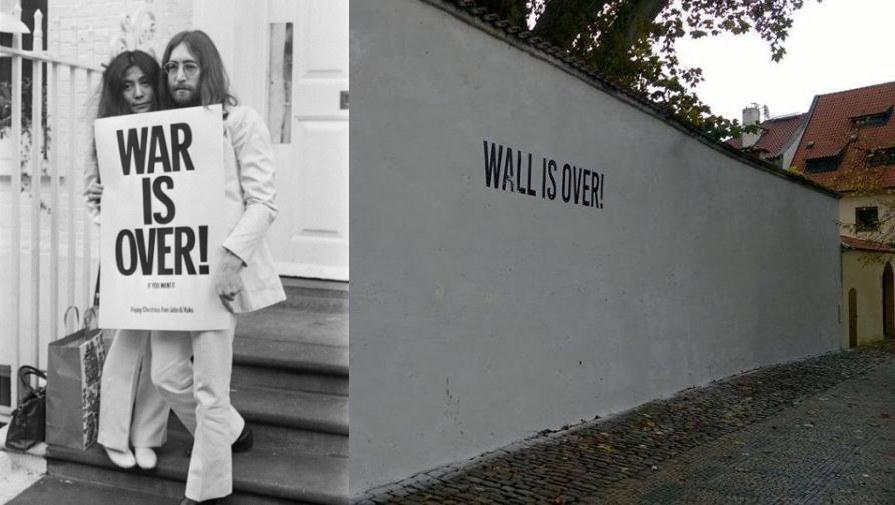 It is December the 8th, 1980, New York, at around 22:50, when a limousine drives along the 72nd street of Manhattan and pulls over next to large, late nineteenth century style residential building, the “Dakota”. A man comes out of the car in his black leather jacket, holding audiocassettes. Meanwhile, on the street facing Central Park, a 25-year-old security guard, has been waiting for hours, named Mark David Chapman. As the man takes his first steps, Chapman follows him, and from a distance of about three metres fires five shots to the back of the victim. In the confusion that follows, the 25 year old is disarmed and immobilized by the doorman of the Dakota, who screams, “Do you know what the hell have you done?”. “Yes”, the man calmly replies, “I just shot John Lennon”.

The following day the news is on the front pages of newspapers all over the world, as much east as it is west of the Iron Curtain. The Beatles legend, the rock star, and pacifist John Lennon murdered by a deranged man in New York.

From 9 December 1980 the Liverpudlian artist entered into the mythology of pop culture, and the commotion was followed by commemoration. In the grey Prague of the Normalizace, graffiti remained the preferred method, especially of young people, to express the emotions which would have found acceptance within the “respectability” of the regime with great difficulty. A wall, four metres high and over twenty in length, in the area of Malá Strana, a short walk from the island of Kampa, which was in particular the preferred form of diary of the youth movement in the capital. At the time it was called “the Wall of weeping”, and mainly collected poignant poems and messages of love. For someone it seemed natural, on a December night, to take a stroll in Velkopřevorské náměstí (the name of the square where the wall is found) and write a message paying homage to the musician. Below, from the pavement, a white plate formed part of the wall, which was perfect as a symbolic tombstone of Lennon. That someone was not alone, and in a few weeks the wall was filled with lyrics from the Beatles and the Lennon/Plastic Ono Band, portraits, drawings, messages of hope, messages directed at everyone. The wall began to absorb all of the longing for freedom of the period.

One must bear in mind that the myth of the former Beatle was not just an icon of the West, a product of marketing of a “better life”, nor a glossy star of the entertainment industry. Lennon was precious, precisely for being a spokesman critical of the world beyond the Iron Curtain, a pacifist, hippie, protester, and yet also contested, a thorn in sides. He was not a sponsor of capitalism, he was not tightly grasped in the palm of the other hand of the Cold War. John Lennon was the chance to express opposition to a system, while living inside it. John Lennon was the most absolute freedom.

The wall was not viewed well by the authorities, who attempted, though feebly and without much conviction, to oppose the actions of the writers. In 1981 graffiti was erased. However, a demonstration was permitted on the first anniversary. The authorities lost interest in the wall for a few years. The situation began to get more serious for the regime when it became not only a collection of messages, but also a catalyst of the protests. On December the 8th, 1987, several hundred young people gathered in the shadow of the wall to give life to an unauthorized peace demonstration. Parading around the city, among slogans for civil rights and the withdrawal of Soviet forces in the country, singing the famous ‘69 musical piece “Give peace a chance”. From this moment onwards the term “Lennonist” was born. It is said that it was Gustáv Husák in person, the party secretary, who coined it – a sarcastic and derogative term in principle, a mix of hippies, sociopaths, alcoholics, and needless to say, also counterrevolutionary agents of capitalism. In May 1988, an article on civil disobedience in Eastern Europe appeared in the “Bulletin of Atomic Scientists”(an American pacifist magazine), identified the Czechoslovakian Lennonist groups as a thousand pacifists, ecologists, libertarians. Although modest, the group was a headache for the party, which decided once again to remove the graffiti behind a dark military green. The day after the Lennonist group returned to color it, and therefore several times over the last two socialist years, the stupidity of the regime did not realize that every form of censorship would make the desire to write even stronger.

With the arrival of the 1989 events, the wall acquired its status as a symbol of peace and freedom. Such were the oddities of the time: walls to knock down, walls to paint, walls as division, walls as a union.

The fame of the wall in Prague, following the fall of Berlin’s, spread through the rubble of the Soviet empire. In Moscow, following its example, the Tsoi wall was born in 1990, dedicated to the premature death of rock underground legend Viktor Tsoi, who had set the basements of the eighties alight. In central Arbat Street, once strolled through by the Moscow nobility, back then headquarters of the hierarchies of the Politburo, it has become a tourist landmark of the city. 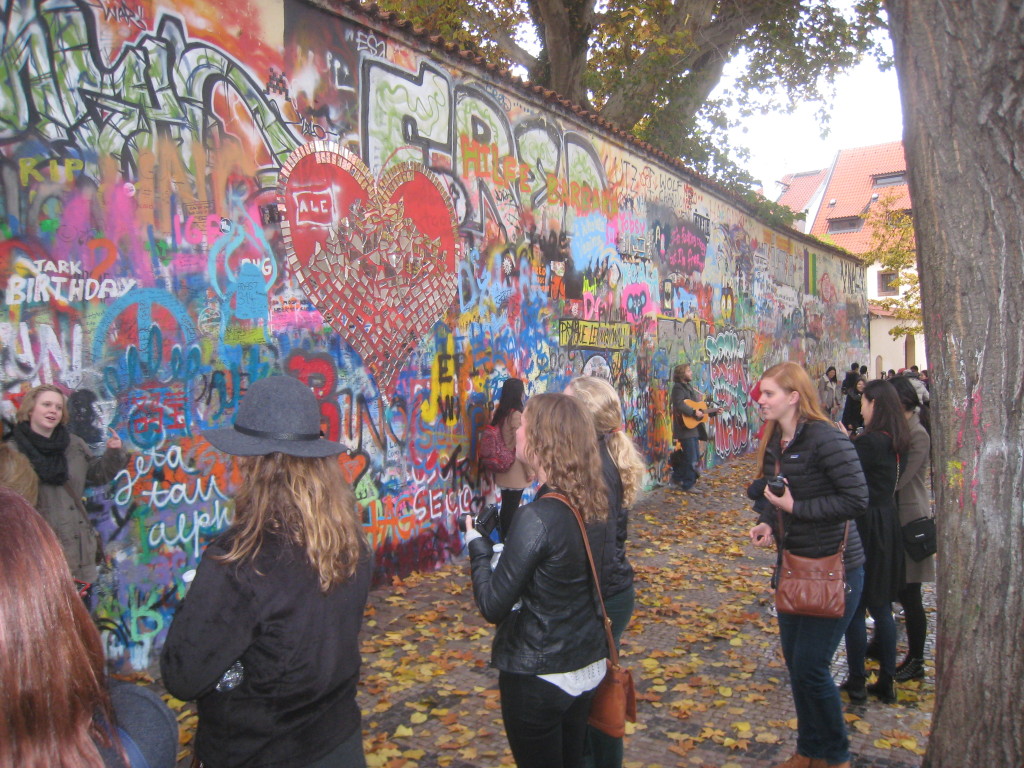 The transformation of the wall into a major attraction is an integral part of the market economy. The logic of the tourist, in a city like Prague (six million tourists a year), has made the wall a necessary sight in travel guides. Besides the old Lennonists, graffiti artists in holiday have joined in, to the political messages the simple signatures of school trips have been added, while the wall changed faces and colors, yet constantly maintaining its “dedication” to the former Beatle. However, the decline of the political motive is a recurring theme, a forced reflection on the original and current meaning of the historical memory, of the symbols and myths of civil disobedience. Having perhaps been driven by a similar reflection, by this desire to “update” the wall and free it from tourism, a group of students decided to carry out the work of the old regime – to whiten it. At dawn on November 17, the 25th anniversary of the Velvet Revolution, the students deleted the collage of graffiti and drawings, leaving a simple inscription: “Wall is over”, the wall is finished, to paraphrase the famous song by Lennon against the war in Vietnam, “Happy Xmas – war is over”. Like the large writing on the white background “War is over” appeared before Christmas 1969 in Times Square, Velkopřevorské náměstí was woken up the same way on 18 November.

The group, named “Pražská služba” (Prague Services), declared to have carried out the act to give way to the voices of the new generation, a restart. The gesture was accepted and supported by the Academy of cinema in Prague, the Famu to which the students belong. “Without the school”, the student Mikuláš Karpeta told Radio Praha on behalf of the group, “we would not have done anything”.

The artistic goal immediately clashed with the epithet of “vandals”, which was declaimed, firstly, by its owners.

In fact, what is beyond the wall has never interested anyone, or almost. With the “nasty business of Velkopřevorské square” it turns out that the wall is not completely a common good. It is in fact owned by the Sovereign Military Order of Malta, the religious order of the Knights Hospitaller of medieval origin – historic asymmetries worthy of Prague! – that at first wanted to file a complaint against the students. The idea then seemed excessive, the complaint was withdrawn, but the reaction raised more than a few eyebrows, one asked what the interests behind the attraction of the wall actually were. On the other hand, being called vandals is an action worthy of the bricks in question, and in a certain sense, closes the circle.

The controversies have calmed down, and the wall has returned to talking. It is easy to think that before Christmas, it will already be covered with new graffiti. Whether they are the voices of the dreams of the new youth, or those of thoughtless tourists, the wall of John Lennon will remain alive. As the first message said after the coating of white, the wall is never over.