Between Bohemia and London, with Leonardo da Vinci as guiding star: notes on a great artist of the 1600s

His last words were for the bailiffs. To beg the officials not to take away his poor resting place. This is how supposedly ended the life of the Praguian Wenceslaus Hollar in London, in 1677. An ungrateful epilogue, for one of the greatest graphic artists of all time, an icon of the seventieth century Baroque art. And to think that this Bohemian by birth and British by adoption, had attended royal courts and the high aristocracy, and crossed and captured for eternity the landscapes of half of Europe. Strange twists of fate, in a century bloodied by terrible wars. And if that weren’t enough, there is a surprising silver thread crossing time and geography that links Hollar’s talent to the images of the greatest genius of the Italian Renaissance: Leonardo da Vinci. The immense production of the Praguian artist comprises even a few dozen engravings inspired by the grotesque drawings of the Tuscan master. They are profiles of deformed men: warty noses, oblong chins, crippled faces. Grotesque portraits that reach the Leonardesque originals or mix their features bringing together even three, four heads in one engraving. 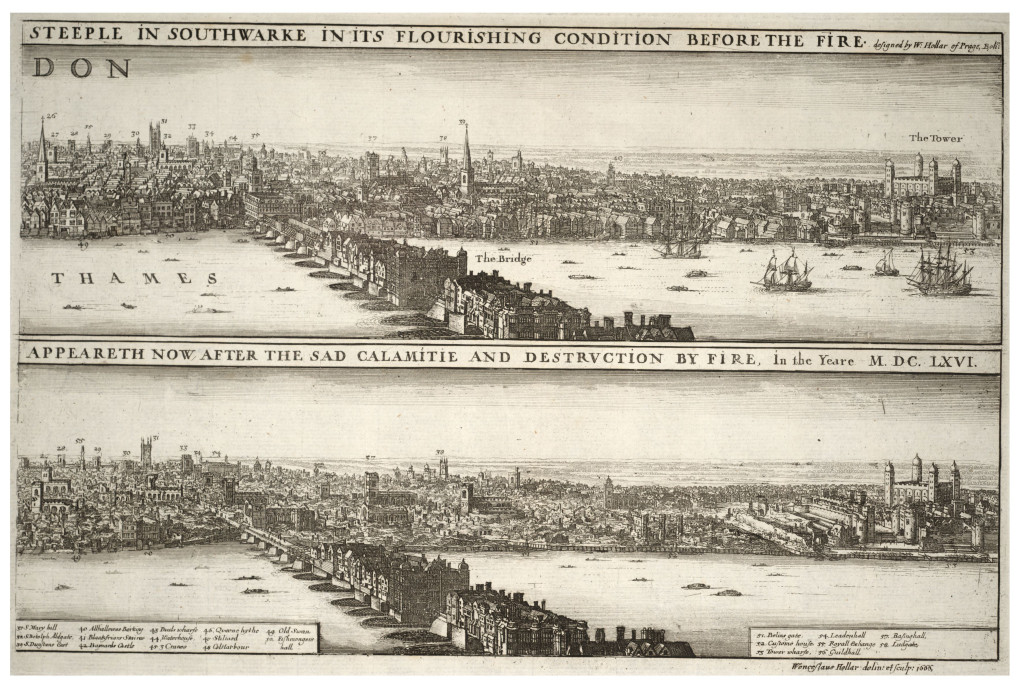 But let’s go back to the beginning of the story, to the seventieth century Prague. Wenceslaus was born here, in 1607, in a wealthy family of the small Czech nobility, and spent his childhood here, during the terrible period that marked the outbreak of the Thirty Years’ War. He started engraving – as far as it is known – at the age of eighteen under the guidance of Aegidius Sadeler, a Flemish specialist from Antwerp, who came to Prague at the time of Rudolph II.

His father tried in vain to oppose his artistic career and direct him towards the jurist one. No success. At that precise moment, Hollar decided to leave the country, to west Europe where he perfected his engraving technique with the greatest masters of the time. Frankfurt, Strasbourg, Rhine Gorge. All horizons becoming subject of his designs. Until an encounter changes everything in Cologne, in 1636. Hollar was twenty-nine years old. It was one of those opportunities that change the perspective of life. In fact, the artist encounters his patron. For Hollar, the destiny’s hand belongs to Thomas Howard d’Arundel, one of the most influential and rich nobles in England, on a diplomatic mission in the name of the crown to Emperor Ferdinand II of Hapsburg. A diplomat involved not only in politics, but always looking for new acquisitions of works of art and for an efficient graphic artist able to undertake the reproduction of the items in his collections.

After this encounter, Hollar follows his count – and new client – from court to court, reaching the imperial one in Vienna and stopping as well in his native Prague. Precisely on that occasion, following Arundel – despite a short period of time spent in the Golden City – he created one of his most famous works, the city panorama captured from Petřín. An image that relays beauty and nostalgia, with a nearly romantic atmosphere. The artist’s affection for his homeland is perceived in this landscape. Speculations? Maybe. What is certain thought, is that even as an expatriate, in exile, the Bohemian artist will have remained tightly connected to his identity: his signature was Wenceslaus Hollar Bohemus for the entirety of his life.

However, let’s return to the story. When the Count of Arundel returned to England, Hollar followed him and settled in his benefactor’s London-based residence. England became his new home country. It’s here that the Praguian engraver became an adorned artist. And it’s precisely in the English capital that his lines, precision and the beauty of his designs marked black on white a memory that would otherwise have been lost forever, gone up in smoke in the great fire of 1666. It’s thanks to Hollar’s engravings that nowadays we can have an idea and an image of medieval London. Tireless worker, his talent for image doesn’t match the one for business as the artist seldom sold his creations.

Art never made him rich. Highly connected to his homeland, he left England only during the civil war, when, after being enrolled and taken prisoner, he managed to escape in incredible conditions. He returned to Antwerp where he created many of his famous works, including Dutch urban landscapes, seascapes, representations of nature. He returned to London in 1652. However, his work for editors and his revenues diminish as the Court would no longer buy his works after the end of the civil war. His success path descends. During this time, the plague takes away his young son, known for his artistic skills. Tireless, Hollar doesn’t stop adding pieces to his great “universe work”, because this is what it is about. An immense and heteroclitic production, comprising at least 400 designs and 3000 etchings. If the images of the German, Bohemian, English and Dutch cities and country sides are without doubt his most famous works, the artist created many images of saints as well, scenes of the Old and New Testament, mythological and historical representations of plants and animals, still life. And to all this we add the Leonardesque Hollar. At least until 1666, we know that the artist reproduced unceasingly the drawings of the maestro from Vinci, present in the Arundel collection. Most of the engravings resulting from Hollar’s work are today kept in the Royal Library of Windsor, in England, but thirty of these prints were bought in the 1950s by Carlo Pedretti, a distinguished art historian, specialized in Leonardo’s art, always aware of the value that Hollar’s engravings had in spreading Leonardo’s ideas in the seventeenth century. Precisely these were displayed this year in the exhibition “Leonardo designed by Hollar” in Vinci, an event organized as part of the 500th anniversary of the death of the great Italian artist. In these unique creations, Hollar often associates the youth with the ancient, the ugliness with beauty, reflecting Leonardo’s thoughts on beauty and ugliness: an aesthetic that combines the monstrous and the phantasmagorical seeking the sublime in foulness. Thus, when the most brilliant graphic artist of his time captures the way of the greatest Italian Renaissance genius, we find ourselves in front of an unusual, unique work, an art that echoes beyond the turns of history. This is the work of a Praguian artist born on Soukenická street in Prague who left us a unique trace of our Italian heritage.