Home  »  Current Affairs   »   In Ustí, on the day of the race that knocks down walls

In Ustí, on the day of the race that knocks down walls

The problematic industrial city of North Bohemia, on the day of the annual invasion of runners for the half-marathon. The challenge for Carlo Capalbo, organizer of the race: “Ustí is much more than just a race. It is a source of pride for the city and also for us in RunCzech”

We arrive at Ustí nad Labem on a grey, at times rainy day. It’s not a good start.

The city lies above the confluence of the Elbe and Bílina rivers, halfway between Prague and Dresden. Coming from the capital, thanks to the perennial motorway works, you are lucky enough to follow the Elbe on a narrow two-lane street. The low sky and heavy clouds give a melancholic panorama on the road, which slides into silvery tones between the dark and wooded hills. The medieval castle of Střekov, perched on a promontory, announces arrival once at the destination. The landscape is gloomy but fascinating, poetic, and perhaps because of this, the entry into the city is even more harsh: Ustí nad Labem, a brutalist postcard in a dusty frame, appears as simply, unequivocally, ugly. 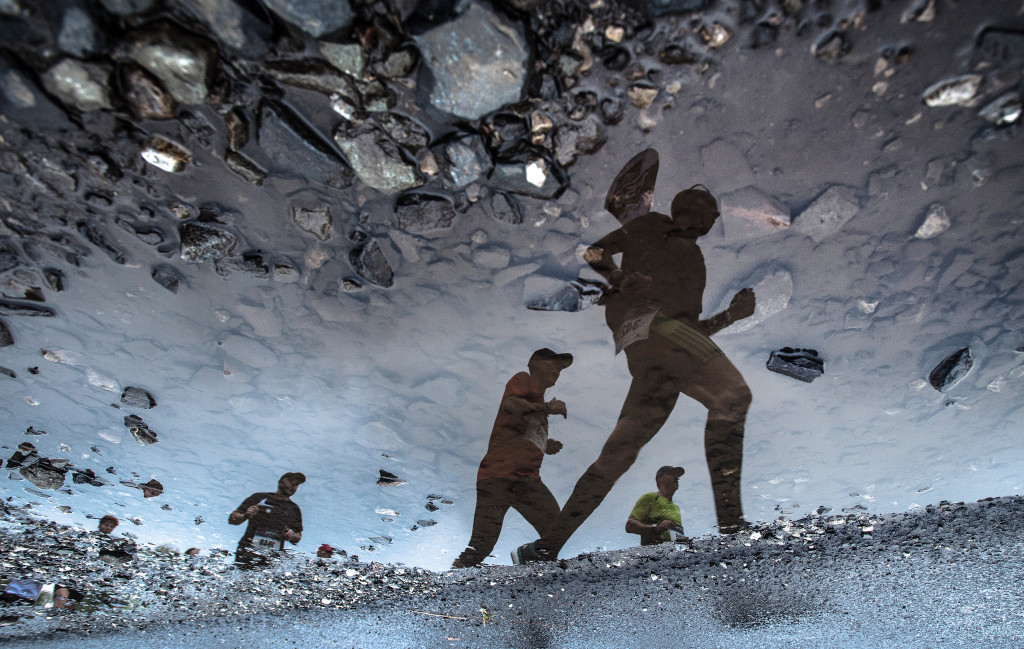 We could say, to soften the tones, that the city shows its industrial no-frills vocation: it houses food, and chemical plants, and metalworks, it is an important port (from here Czech goods reach Hamburg) and a large railway junction. Its historical origins, since in the 13th century King Ottokar II of Bohemia invited German colonists to build cities on an older settlement to make a commercial outpost on the river, are mostly buried by cement. On the other hand, before the strong industrialization it was of a small size; the 11,000 inhabitants in 1870 had quadrupled in 1900. At the turn of the century, the Aussig river port, its name at the time of the Empire, saw trade growth so high that it exceeded the value of Trieste’s port affairs. It seems difficult to believe today, but Ustí was the symbol of well-being, the industrial heart of the Empire. A well-being, it must be emphasized, that was particularly German. Not only were they the majority of the inhabitants (as the 1930 census shows: out of 44,000 inhabitants, were 34,000 Germans), but this was the birthplace of the German Sudeten Party, which became the Nazi battering ram in the 1930s; a party for which the annexation to the Reich in 1938 was a day of celebration. On January 1, 1939, the local synagogue was set on fire. In 1945, the city was heavily bombed by the allies. In 1946, the German majority was expelled from the city. And then, real socialism, the difficult economic conversion of the 1990s, the cumbersome presence of old industrial plants… Today the city is still behind the rest of the country. Unemployment, although falling very much in recent years, is twice as high as the national average, and new jobs are not created so easily: for every vacancy in the Czech Republic there is an average of 1.4 unemployed; in Ustí nad Labem the number has risen to 7.2. In addition, we are in the middle of the so-called “black triangle”, the Schwarzes Dreieck, a German term coined in the late 1980s to describe the strong pollution between the north of Bohemia, eastern Saxony and Poland, all of which are industrial and mining areas.

Grey day, grey memories, grey streets. Yet to distract grumpy thoughts, a lonely runner darts past. An apparition followed by other characters in sportswear, like silent, fast animals passing by and disappearing behind in an alley. We follow them in the direction of Mírové náměstí, the main square of the centre. And so, finally, here you find the colours: our arrival coincides with a day of celebration. The square is crowded with people, who move swirling among kiosk queues. It is the seventh edition of the local half-marathon organized by RunCzech, which for more than twenty years has been making Czech citizens run, and in 2017 has made more than 90,000 take up running in 42 different events. On the road that runs across the square, defined by banner advertisements, you find the finish and start lines.

“I would say a race that is not just a race. It’s a lot more, a reason for pride, a business card representing the city.” We provoke Carlo Capalbo, the RunCzech president, into finding a phrase describing the race. The emphasis is inevitably on the social charge that this has for the inhabitants.

Let us try to understand more. Certainly it is easy to think of using architectural jewels like Olomouc or Karlovy Vary (besides, of course, Prague) to organize a half marathon. But Ustí nad Labem?

“Eventually, people are always ready to justify everything, to find stories about the past, but the reality is that there is always a good deal of luck. After having taken the race to Olomouc there were several cities that wanted us. A friend called me while saying Carlo, if you do it in Ustí certainly the city, the region, will all give you a hand – and this friend of mine is a good one, likeable, he convinced me… The result? Probably, for these people, it is the best event of the year, with 3,500 people, plus more than 3,000 for the race for families, which out of 90,000 means a lot. It has become and will remain a beautiful tradition for the city, for a part of the country that has lagged behind”.

Of course the early impact could not have been simple. Carlo confirms this. “The first impression, seven years ago, was terrible. The city is divided in half, with one part being more presentable, and thus being chosen to think up the first race course, and another… less so, being the poorer area – the Roma ghetto. However, these events have to be inclusive, or not done at all, in the end I was talking to the local Roma community and today, check this, I have Roma volunteers taking part”.

It is worth inserting an editorial note here. Because the discomfort of the local Roma community is not merely a minor topic. According to the latest census, there are fewer than 1,400 citizens of Roma nationality, but the reticence of the inhabitants in defining themselves as such, carry the actual number, according to experts, near to ten thousand. And the coexistence with the rest of the citizens was not the best. It was in the late nineties, when the decision arrived from the town’s mayor, Ladislav Hruška, to build a wall on Matiční ulice, the road that delimited a largely Roma area from the “respectable” rest of the city. The wall of discrimination, 150 metres long and nearly two metres high, was erected in October 1999; following protests, which swept fast from the local community into the international media, was demolished after only six weeks; leaving a solitary shame on the city. The neighborhood, a semi-peripheral area near the river, poor and more anonymous than fitting the popular gypsy stereotype, is now in a state of semi-abandonment. Decadent houses, cement and paneláky. 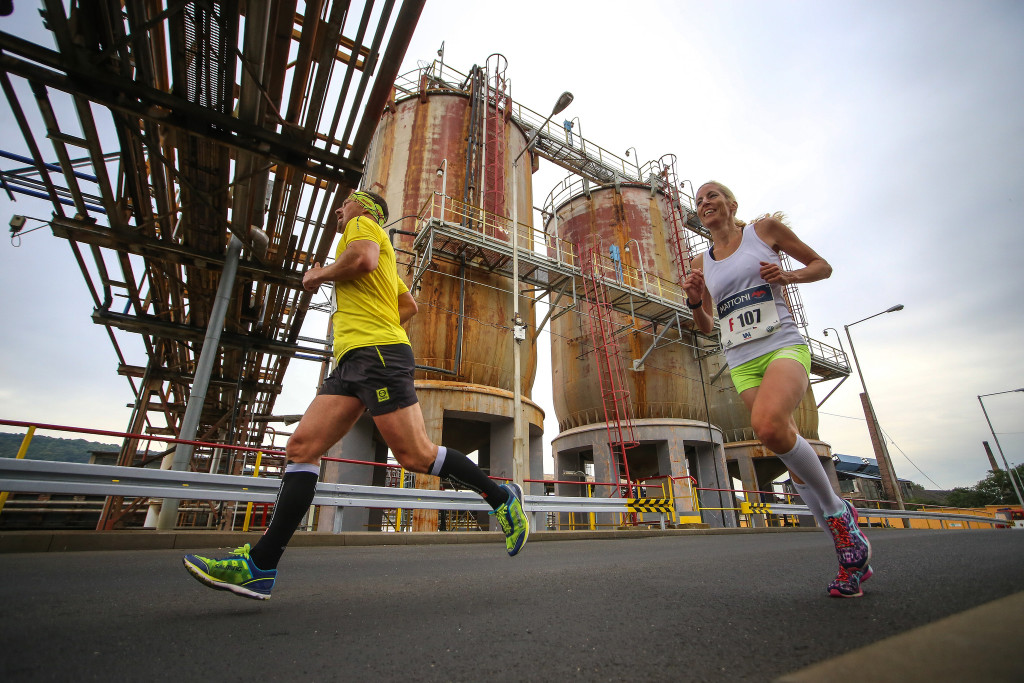 Considering these events, the unanimous lure of the race has an even sweeter taste. Today’s inhabitants fully participate “really putting their soul in it, and, by the way,” Capalbo shrugs, with unconcealed pride, “it is the fastest one, where we break world-class records. And we have races that are at the same level as New York or Tokyo, in terms of quality. It is the miracle of Ustí”.

We look at the city with more reflective eyes, waiting for the main run. In a sealed off square where socialist architects vent their proverbial lack of originality, a girl stretches near a fountain. We visit the city museum, a three storey building with austere charm. On the ground floor the ticket office is actually a cafeteria lit up by large windows, shiny, immobile, classic, with a large pendulum at the bottom of the room. An elderly lady displaying an actress smile sells tickets, distributes brochures and serves coffee in great silence. Outside of the large glass windows hand-bikes dart off giving a softened roar sound, another of the “social” races of the day. On the two upper floors, various exhibits, the medieval Ustí, a naturalistic show, stuffed animals, the local painter Zdeněk Košek are distributed. Clean and silent, the impression is that the museum does not get to know many visitors. The stoic resistance of uninhabited museums is a distinctive sign of the bohemian province.

Returning to Mírové náměstí, we find RunCzech volunteers under communist-era murals. The murals speak of resistance, the people unanimously marching, the sure look towards the future. Facing, an apparently abandoned yard. It is almost the half marathon start, and we return to the square in a river of people. We watch the wait for the start from a cafe in the corner, served by a smiling waiter who can finally practice his English, with so many runners coming from abroad to visit such a peculiar city. The grey is cumbersome and it is difficult for Ustí to communicate that there is an industrial and economic recovery underway, and that its university hospital is among the most renowned in the country, and its municipal theatre is known in the environment as innovative and daring. The image of volunteers under the murals, among the few human traits of local architecture, gives an idea of continuity. Remember that the city that does not boast beauty is, above all, a community. Marching. And, once a year, running. 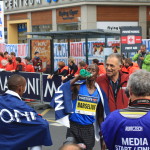 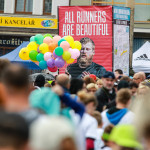 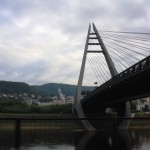 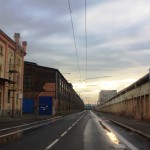 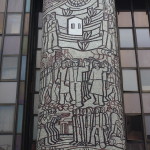