From top of the class to donkeys of the pandemic

After the spring successes, the Czech Republic was surprised by the second wave of the coronavirus in the autumn

The return of the pandemic at the end of the summer had a decidedly abrupt impact on the Czech Republic, which was, at least initially, completely unprepared for this second wave. The coronavirus is also having repercussions on their international relations on a political level, since the Prague government, after having praised itself as one of the most capable in the world in dealing with the health emergency, even found itself in the situation of having to accept a helping hand from other countries.

Amidst the daily infection charts and constantly rising numbers of people admitted to hospital and victims, there has been no lack of other topics of relevance to Czech foreign policy this autumn. For example, the new friction between the head of state and the government surrounding the head of the counterintelligence services, a disagreement behind which a diametrically opposed vision seems to be emerging between the Castle and the executive on what priorities should be in terms of international relations. The activism of Prague in Mali and more generally in the African Sahel is also interesting. All with an eye obviously turned overseas and the developments of the presidential elections in the United States. 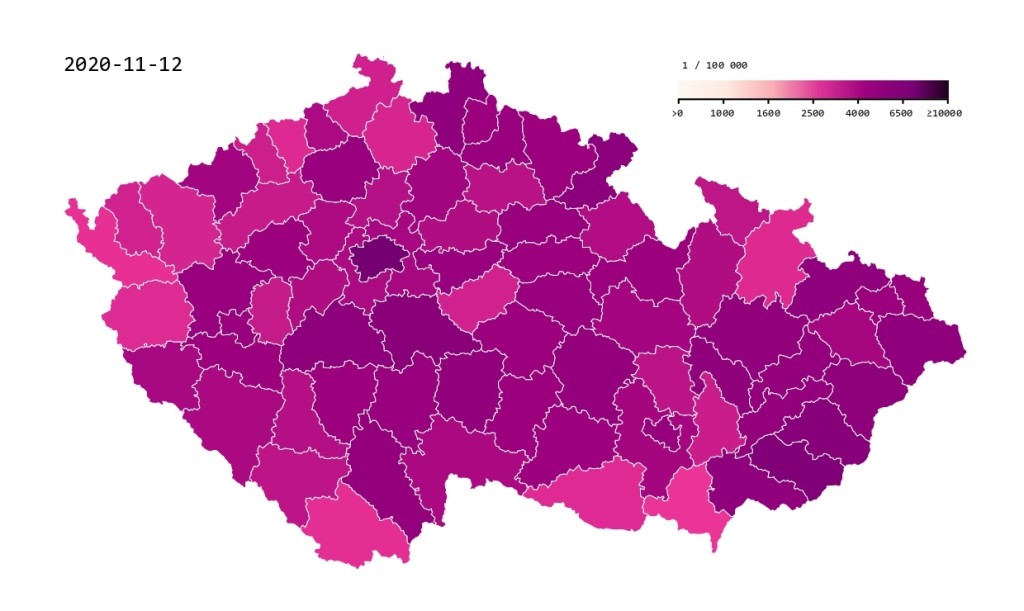 As mentioned, the Czech Republic has quickly gone from being an example of an excellent response to the first wave of the pandemic, to the Cinderella of Europe. In fact, it has reached one of the highest infection rates, becoming for a few days even the worst worldwide in terms of mortality rate among infected patients.

The three health ministers who took turns in less than three months made it clear, not only to the Czech public, but to the eyes of the whole world, how many flaws there had been in the coronavirus countermeasures in Prague and its surroundings. All this after an entire summer spent listening to Prime Minister Andrej Babiš praising the Czech Republic’s ability to keep the virus at bay, not to mention the dinner organized at the beginning of July on the Charles Bridge with thousands of people celebrating “the end of the pandemic”.

After the overthrow of the inexperienced Adam Vojtěch and the premature inglorious end of Colonel Roman Prymula, forced to leave for the violation of the very anti-Covid rules he had imposed, the current Minister of Health, Jan Blatný, arrived hastily having been called upon to counter this new and more powerful wave.

And in the meantime in Prague, when it was realized that the situation was very different from March-April, the diplomacy operation was launched. The diplomacy of the outstretched hand, addressed to friendly countries, a series of which have accepted the request for help by sending lung ventilators, medical teams and protective devices.

At the beginning of November, the Czech Chamber ratified the government’s request to allow the arrival in the country of 28 National Guard doctors sent by the United States and, more generally, of foreign health teams, with the explicit condition that they came from countries of the European Union and NATO. The decision was, among other things, another source of clashes with the Communists of KSČM who asked to be able to expand the aid team to doctors from other UN member countries, such as Cuba and Russia. A proposal that the Czech Chamber rejected.

In recent weeks, 60 lung ventilators arrived from Italy (made available by the Atlantic Alliance), 150 ventilators from Hungary, 45 from Austria, 30 from the EU.

Germany was among the first to come to the aid of Prague. Berlin made it known in mid-October that, should there be a shortage of places in intensive care in the Czech Republic, German hospitals would be ready to welcome Czech patients. The proposal was relaunched at the beginning of November also by the governor of Bavaria, Markus Söder, who, speaking with Prime Minister Babiš, told him: “in case they need to be served, we have 100 places ready in our hospitals for your most seriously ill patients”.

Then the helping hand of the European Union arrived. “The Czech Republic is facing one of the most difficult situations in Europe and we do not leave our friends alone in these difficult times”, said the president of the EU Commission, Ursula von der Leyen.

The World Health Organization, to which Prague turned when the increase in infections among health personnel took on an alarming pace, also expressed its willingness. It should be noted that the WHO just a few weeks earlier, on the occasion of the United Nations General Assembly, which took place online this year, had been targeted by Czech Prime Minister Babiš with the accusation of not having been able to communicate reliable information for fighting against the pandemic.

The Czech health emergency also contains a curious chapter regarding relations with Russia. A Prague-based Russian businessman named Andrey Konstantinov hit Czech newspapers with his Covid tour offer, basically a full package, with travel to Moscow from the Czech Republic and Sputnik V vaccine included, all for reasonable figure of 1,200 euros. An initiative that forced the Russian Minister of Health to intervene and specify that it was nothing but a scam.

The fact remains that, if the Russians are the first to receive full authorization to market their vaccine (even if competitors are catching up), this could undoubtedly influence international politics. Moscow would have the tool to put an end, or at least ease, the health and economic crisis.

Among other things, the former Czech Minister of Health himself, Colonel Prymula, always carried in the palm of the hand by President Miloš Zeman, who in October awarded him the Order of the White Lion, the highest Czech honor, a few days before receiving the responsibility had expressed his opinion on the likely effectiveness of the Russian vaccine rather positively.

Spy games in the shadow of the Castle

In addition to the coronavirus, there are other important issues regarding the orientation of the Czech Republic’s foreign policy and its not always unique strategy, divided among the various state powers.

One of the most fitting examples is that of Michal Koudelka, the head of BIS, the Czech Republic’s counter-intelligence agency. At the end of October, President Miloš Zeman rejected the government’s proposal to promote him as a general for the fifth consecutive year. He reiterated that in his opinion the head of the BIS should be removed rather than elevated in rank.

Zeman’s relations with Koudelka have not been optimal for some time. On the one hand, the number one of the Czech counter-espionage agency, which also recently received the applause of Parliament and the government for the diligence with which it reports Russian and Chinese espionage activities in the Czech Republic.

On the other hand, the head of state, who for years has flaunted his friendship with Moscow and Beijing, systematically attacks Koudelka, inviting him to “devote himself to real economic crime instead of organizing witch hunts for Russian and Chinese spies”.

In October, in rejecting for the umpteenth time the proposal to promote Koudelka, Zeman announced: “I will hand over to the government a file on the director of the BIS. I believe that every decision must be explained and this dossier will be my explanation”. The President even added that he had collected the material thanks to the help of Jiří Rom, a former chief analyst at BIS, a bitter enemy of Koudelka, who recently arrived in Zeman’s camp, having been hired by the Castle.

In the clash, Prime Minister Babiš once again sided with the head of the BIS. The prime minister explained that he had talked to Zeman about the problem. “I have a different position on this and I see no reason to change it”, he stressed, reiterating his support for Koudelka. The prime minister also confirmed that the government will try to propose his promotion again in the future.

Last year, among other things, on the occasion of the Czech Prime Minister’s visit to Washington, Koudelka was awarded the George Tenet Medal of Merit by the CIA, the highest honor for the collaboration of foreign services with American ones. This is probably enough to explain why Koudelka was also targeted by the Russian press, which accused him of anti-Russian hysteria and of being at the service of Western powers (obviously with reference to the US CIA).

Moving our focus from Europe and Russia to Africa, the engagement in Mali and the Sahel has taken on increasing space in Czech foreign policy. The stated objective of the Czech government is to launch a strategy to prevent illegal immigration from countries in the area and North Africa, in particular from Mali, Morocco and Ethiopia. It is no mystery, in fact, that Prague opposes the request for the redistribution of migrants in Europe and stopping them before departure can be a method to avoid European controversy.

The Czech Chamber of Deputies in October approved, on a proposal from the government, the sending of 60 special forces soldiers and vehicles to Mali, Niger and Chad to participate in counter-terrorism combat operations alongside French troops. A participation that will be part of the Barkhane counter-terrorism mission that France has been conducting in the African region of Sahel since 2014. These 60 soldiers will join the 120 Czech soldiers already present in the EU training mission and who remained in the area even after the coup d’etat in Mali. Just recently, the Czech Republic took command of EUTM (European Union Training Mission) in Mali for the first time, with Brigadier General František Ridzák.

US elections and awaiting news

It will be interesting for the Czech Republic to understand how the world balance will change following the election of Democrat Joe Biden to the White House. After four years of fierce Trumpian rhetoric on Twitter, there is much worldwide curiosity and obviously it is also the case in Prague. Both Prime Minister Babiš and President Zeman, as a first step, immediately congratulated the Democratic candidate. Now Biden, having overcome recounting and accusations of electoral fraud, will have to take care of American foreign policy. Prague in particular, will be affected by the duties on exports and the American presence in the central-eastern region of Europe, in an anti-Russian role.