Home  »  Politics   »   The EU as viewed by Prague, so far away but so important

The EU as viewed by Prague, so far away but so important

After Brexit and the migrants crisis, the EU’s future also depends on central Europe

In this last year, the European Union has become a Manichean reality, in which everything is either black or white, pro or con and either in or out. After Brexit, this opposition between the parties has intensified and the populist fronts, anti-Europeans and nationalists, in the various countries, have raised their voices demanding more independence and fewer constraints, both on budget issues and the reception policies of Brussels. Embedded in a few of these dichotomies are the strong critical points of the Visegrád Group, the Czech Republic, Slovakia, Hungary and Poland: no to migrant quotas and the excessive centralization of decisions in Brussels and no to first-class and second-class members. In order to break up this central-European alliance and strengthen the axis between Prague and Berlin and between Berlin and Warsaw, the German Chancellor Angela Merkel dedicated special attention to the tour that brought her first to the Czech capital and then to Warsaw, to meet the V4. A visit that stirred mixed reactions in the Czech Republic: on the one hand, street protests, the alleged potential killer, who supposedly followed the German parade and the poster depicting the Chancellor wearing a jihab and Hitler-type moustache, and on the other, the smiles and handshakes with the Czech authorities. 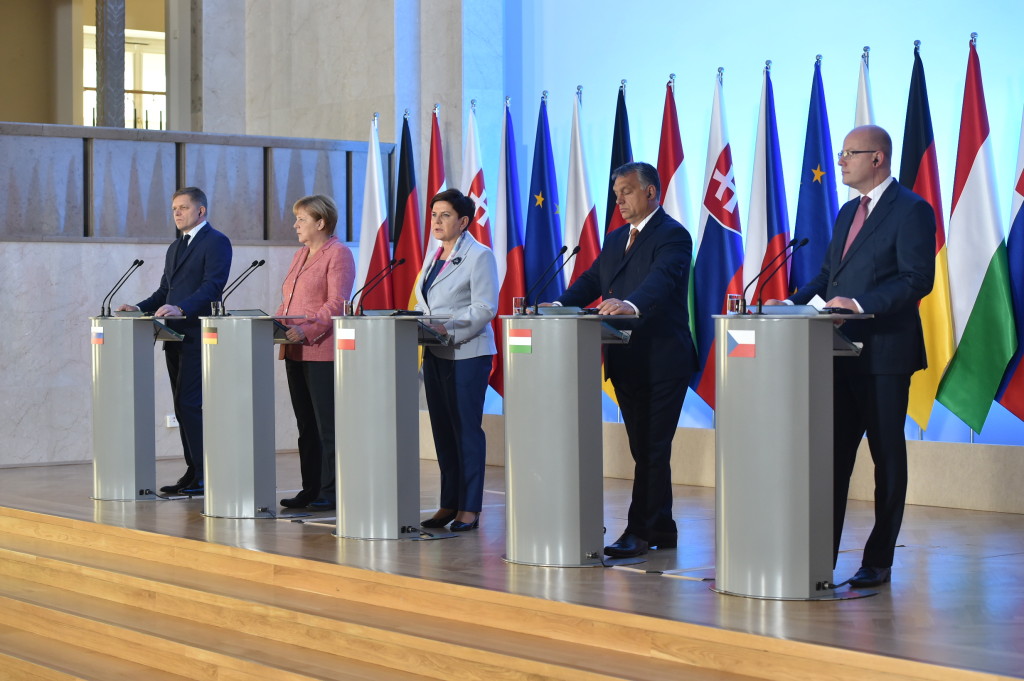 The visit, that took place at the end of August, was Merkel’s first to Prague in over four years and, to her critics, many of whom feel she is the “face of the EU” it was also a “provocation”. Despite the bellicose assumptions, the open criticism of President Miloš Zeman, who has likened Merkel to the “Good Soldier Švejk”, the visit highlighted many points of cohesion and agreement between the two countries. Many, but not all, as Prime Minister Bohuslav Sobotka pointed out: “I do not think it was a surprise to the Chancellor nor do I think there was anything new. There are major differences as to how the Czech Republic and Germany see the situation”, remarked Sobotka, referring to the refugee quotas, the political decision that the German leader wanted strongly, but that was opposed by the V4. “We do not want to leave the migration policy into the hands of the European Union and we do not agree with any mandatory and permanent redistribution of migrant quotas”.

But, as we have said, Berlin and Prague are on the same wavelength on various points: the reinforcement of European internal and external security, counter-terrorism, aid to third countries from where the migratory flows originate. “There are many aspects we agree on, also with regard to migration policies – Merkel has stated. – We appreciate Czech support on the EU-Turkey agreement as well as to naval forces in the Aegean”. Although the post-Brexit tour of the Chancellor was focused on discussing the future of the EU and to attempt to appease the spirits of the V4 group, inevitably, even during the meeting with Zeman, the discussion centred on the migrant issue. “Unlike other politicians, who avoid the migrant argument by cautiously dancing around the subject, I have stated from the very beginning that, if you invite someone to your home, you will surely not send him off to your neighbour’s for lunch. It was an allusion to the fact that Germany had initially invited the migrants and then, with the quotas, had tried to find a place for them outside Germany”, remarked the head of state. Merkel and Zeman also discussed about how much the border Countries are doing to limit the flow of migrants, particularly Italy and Greece. And it was these two Countries that the Interior Minister, Milan Chovanec strongly criticised at the end of August, accusing Rome and Athens of not doing enough and expressing the possibility of excluding them. Italy and Greece must “necessarily be obliged to take up this situation seriously, because the real problem is how easy it is for migrants to get through their borders and into the European Union. Otherwise, it makes no sense for Italy and Greece to belong to Schengen”, the minister went on to say.

Just as important as the Prague meeting, but perhaps more symbolic for the Slovak cousins and for the most critical voices in Poland and Hungary, was the Warsaw one – during which Merkel reached out and paid tribute to the Countries of Central Europe in an attempt to erase the idea of “second-class members”, a claim that has often been made against Brussels by the capitals of the New Europe. “I am glad that Bratislava will host the European summit, the first without London”, she declared, while speaking beside the prime ministers of Poland, Hungary, Slovakia and the Czech Republic. “The tradition of meeting in Brussels is a missed opportunity to see the true Europe. At a time when we cannot lose sight of what Europe really is”. Music to the ears of the Visegrád leaders, as also the Financial Times reported, while commenting the words of the Chancellor. And at the same time, a gesture of respect towards the EU presidency, entrusted to the Slovak euro-sceptic, Robert Fico. “We need to focus on the things that hold us together – Merkel remarked, recalling the excellent relations between Prague and Berlin and between the latter and Warsaw, which have been the glue that has held the East and West together for many years – the EU has to be stronger in the future”.

A concept that the V4 would like to exploit to their advantage, by trying to ally with Countries such as Denmark, Sweden and Holland on the need for “a union of capitals” with less centralization and less decisions being made in Brussels. An idea that was launched in the aftermath of Brexit and that has won consensus. In recent months, the four Visegrád members have become a thorn in the side of the EU and especially on that of Jean Claude Juncker, President of the European Commission, who was harshly criticized also in a letter. Far from seeking a Brexit style referendum to leave the Union that, over the years, has allowed him easily to take advantage of the funds for expansion and development, the Central-European countries wish to have, more than anything else, a greater say in decision-making and prefer to define themselves as “euro realists” rather than “euro sceptics”. “Blame it on our Communist past, but we do not like it when policies are decided elsewhere and we are just asked to put them into practice”, declared the minister of one of these Countries.

There are still many divergences and the Slovaks, who hold the presidency, though they had promised to manage responsibly the migrant crisis and the Brexit, have guaranteed that they will maintain their critical attitude, especially on the migrant quotas and reception policy. There are, however, a few issues on which Prague and Bratislava are in agreement with Germany and several other countries: the need for a unified European army. A hypothesis that was revitalized in March 2015 by Juncker and that goes back to the nineteen-fifties. The governments of the Czech Republic and Slovakia have agreed to discuss the future prospect for such an army, in order to deal with “internal and external threats”, declared Sobotka, adding that he had discussed the issue with Angela Merkel, who has “her hands tied due to certain limits imposed by the German constitution”, but, just as the other member Countries, she now believes it is an almost inevitable step and the cornerstone of a future Union, that will undoubtedly be very different from that of today. 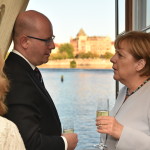 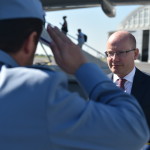 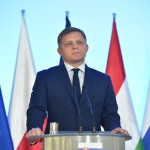 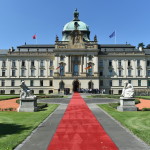