The latest architectural provocation by David Černý evokes the effects of a huge sea wave on Prague
Černý’s idea launches an appeal bearing the strength and courage of his artworks, remaining an innate warning of the potential risk our planet is running

The remains of a stranded tanker ship – even casted – and nestled between a skyscraper and the building at its base. Tons of red lead metal carcass already overtaken by vines; a bare ruin stripped of its plating that flaked off who knows where. The bow stuck in the ground as a twig, or a cyclopean harpoon. A huge propeller up there, towering above the roofs. Another one on the ground, detached, abandoned in the backyard of a new building. These are the imposing remains in the middle of the urban landscape that tell the story of an impact as catastrophic as shocking, beyond the wildest dreams.

An apocalyptic scene at just over ten minutes by metro from Prague downtown, becoming even more disturbing through the fact that the city is more than four hundred kilometers in a beeline from the sea – to Trieste or Świnoujście. The devastating effects of a wave, a tsunami of huge proportions.

This is not a joke nor a publicity stunt, at least not as we are used to think of this type of sometimes brilliant acts. But don’t panic: the catastrophic scenario that could arise by 2024 when exiting the Nové Butovice or Hůrka Praguian metro stations on line B is only – so to speak – the latest invention of David Černý, the controversial and internationally renowned Czech sculptor. 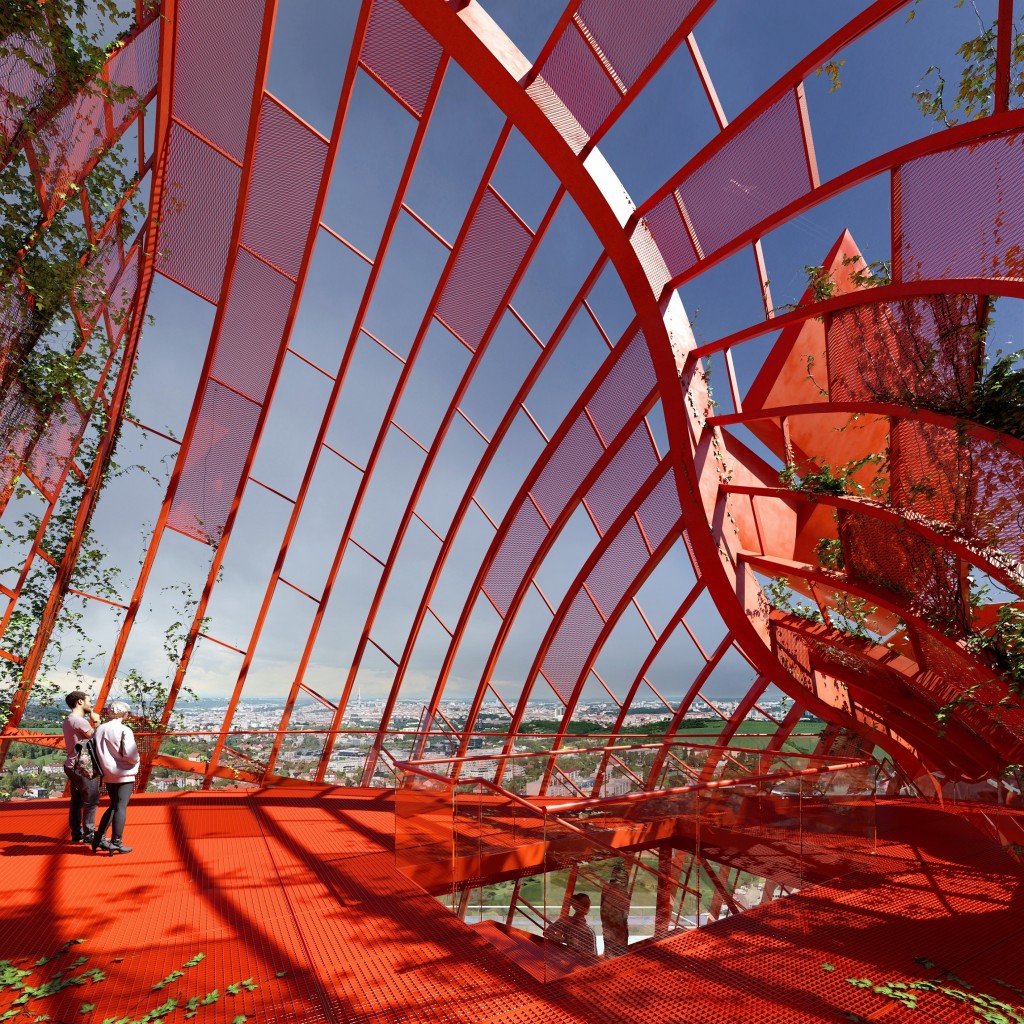 Collaborating once again with Tomáš Císař – the architect of the Black n’Arch studio – the irreverent artist focuses his attention this time around on the environmental and climate change theme. As always, he lavishes on the staggering pervasiveness of the subjects and scenes to send his own message. However, given the urgency, relevance and magnitude of this matter, Černý chooses this time the urban scale to launch his own call through an unprecedented hybrid of sculpture and architecture.

Architecture rarely uses explicit representation as in this case, revealing the sculptor’s decisive contribution in the composition of the whole. However, the naval universe – from the Lecorbuserian transatlantic onwards – has always fascinated architects, inspiring many formal solutions during the twentieth century. Among the most faithful, we must mention the proposal of Le Port Avion of Jean Nouvel for the campus at Faculté de Jussieu in Paris, literally a building shaped like an aircraft carrier section, with many towers and antennas. Even other ships, more or less defined in their forms, have also appeared among the architectural production of the last twenty years. To mention a few, just think about the bridge building standing out with features that resemble an oil tanker on the towers of Moshe Safdie of the Marina Bay Sands in Singapore, the floating and abstract extension of Zaha Hadid’s Antwerp Port House in Anvers or Renzo Piano’s Nemo Science Museum in Amsterdam, immense bow-construction emerging from the pier. Unlike the Top Tower planned for Prague 13, none of these makes such a sculptural use of the naval suggestion. Černý and Císař attribute what ideally remains of the gigantic vessel to an architecture defined as such, without searching any formal association between the ship and the building it intersects.

Furthermore, even more rarely, the architectural or sculptural object that integrates it is the materialization of an element part of a functional narrative designed ad hoc to accompany the project, highlighting and making it part of a story due to its symbolism. Even though post-modernity granted us some examples in this sense, Černý’s tanker ship is already the protagonist of a short film (easily found online) even before being part of the urban landscape. Here, between epic notes and cinematic sounds, the ‘apocalypse’ unfolds and the shipwreck is rediscovered as a landmark after the waters withdraw.

Building a concrete tower of 135 meters high is a questionable way for many to reflect on the sustainability and global warming, although the construction is designed with high energy efficiency and aspires to obtain the Leed Gold sustainability certificate. Certainly, in an international landscape overflowing with examples of sustainable architecture found more in words than in actions, and able to turn sustainability in only a rhetorical mask, Černý’s sharp-cut and revolutionary idea launches instead an appeal bearing the strength and courage of his artworks, remaining an innate warning of the potential risk our planet is running.

Ready to bring Prague the primacy of nesting the highest tower in the Czech Republic – stripping this title away from Brno’s AZ Tower, the building will host over two hundred and fifty accommodations, commercial and office spaces, and a cultural center. It will revitalize the pedestrian area between the metro stations Nové Butovice and Hůrka, already filled with Černý’s creations: the urban sculpture Trifot and the robotic winebar Cyberdog Technology. Like a sort of suspended garden crossed by elevators, the shipwreck will actively contribute to this revival, offering at its top a panoramic terrace to admire the city.

As expected, the project stirred up a lot of waters since its presentation. It had an immediate an international impact, and most certainly in the architecture and art magazines and blogs. Ready to applaud its innovation and criticize in substance the design shapes and choices, they spared no words of praise for the genius of Černý, able to stir up a debate with a master stroke – such as sustainability – an already beaten-path, bringing forward one of his revolutionary ideas with a direct and sincere message.

Instead, it’s the protection of the urban skyline from the possible impact of the new complex with post-apocalyptic features that intimidates and makes the Praguians talk about it. Inevitably, the debate between those in favor and those against flourishes with the most varied arguments, acquiring many relevant opinions. There are those who applaud the novelty wave and those who find the tower completely out of place, using the same arguments that over the years have blocked other innovative projects in the city, among which emerges the signature of Jan Kaplický. There are also those who would cautiously wish for a different location for the tower to favor a harmonious ensemble of high buildings, as are Josef Pleskot – who manages the corporate council of the Institute of Planning and Development of Capital Prague – and Michal Postránecký – founder of the Centrum města budoucnosti (Center of City of Future).

After eight versions and over two years of planning, the developer reassures that the tower will not be visible from the most part of the historical center and will not cause any visual distress. The fairytale-like Praguian skyline is safe, now we only need to devote ourselves to the planet.